Myriad spellings exist for this ostensibly Tunisian-originating dish – doubtless with at least as many ingredient variants, as it's evidently been adopted and adjusted by pretty much every culture with a presence on the Mediterranean.

As part of the whole slow-carb thing I'm experimenting with, and avoiding the potentially risky approach of 'just take beans, add something to them', I've finally gotten around to trying this tasty dish.

This is a hybridisation of Hugh Fearnley-Whittingstall's recipe (taken from his most excellent Veg Everyday book) with a pseudo-traditional recipe that I discovered my sister has been using for years. 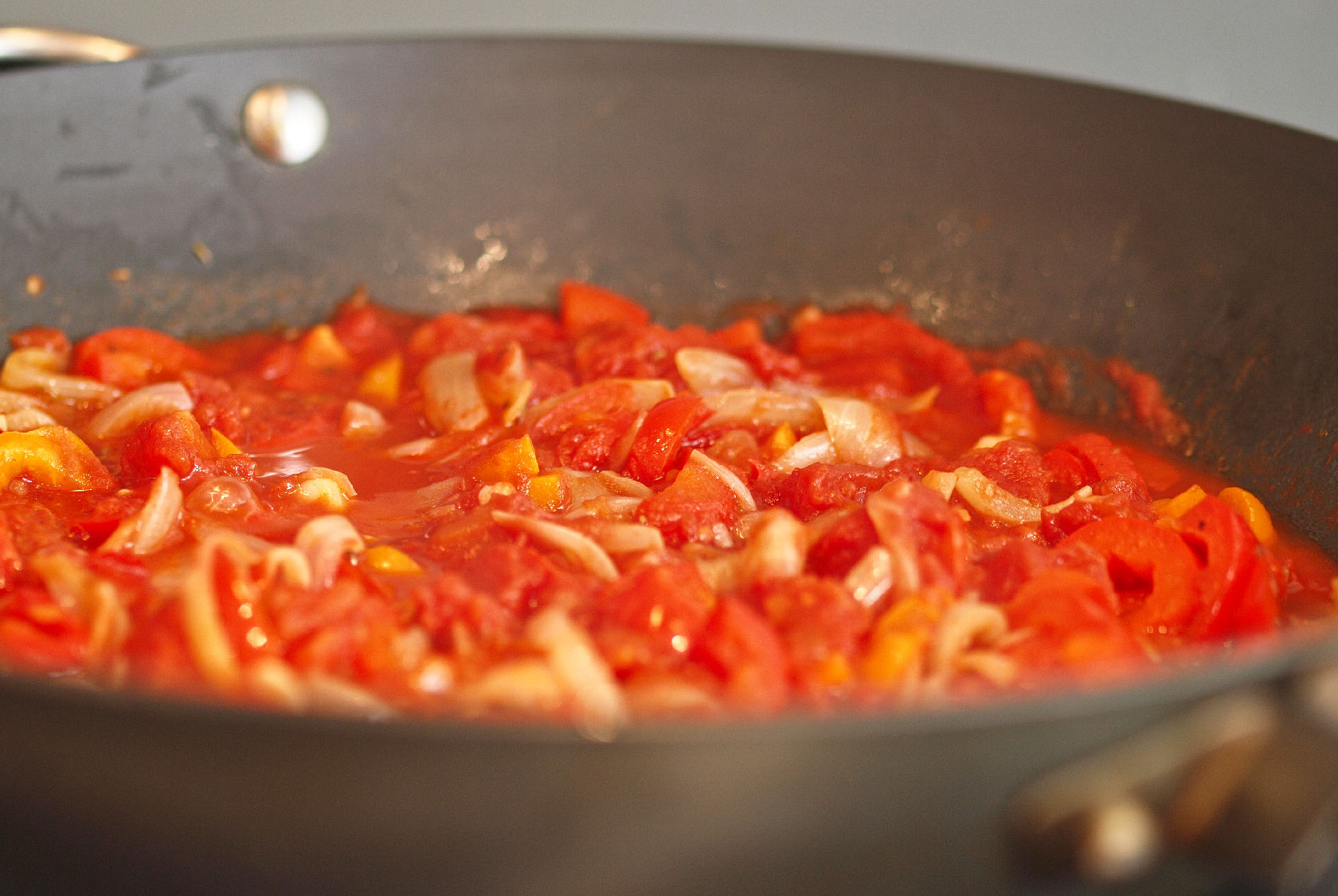 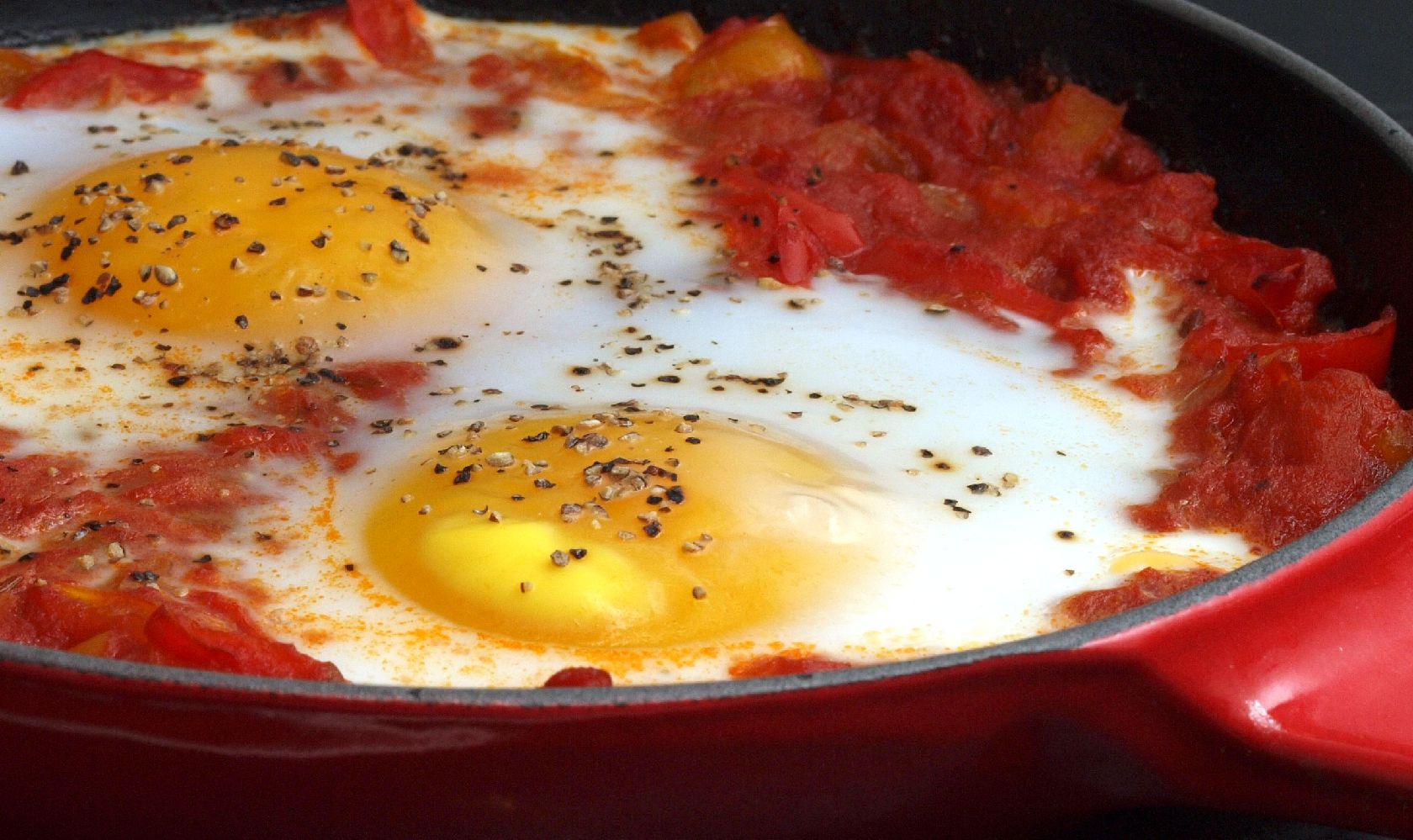 Cast iron is on 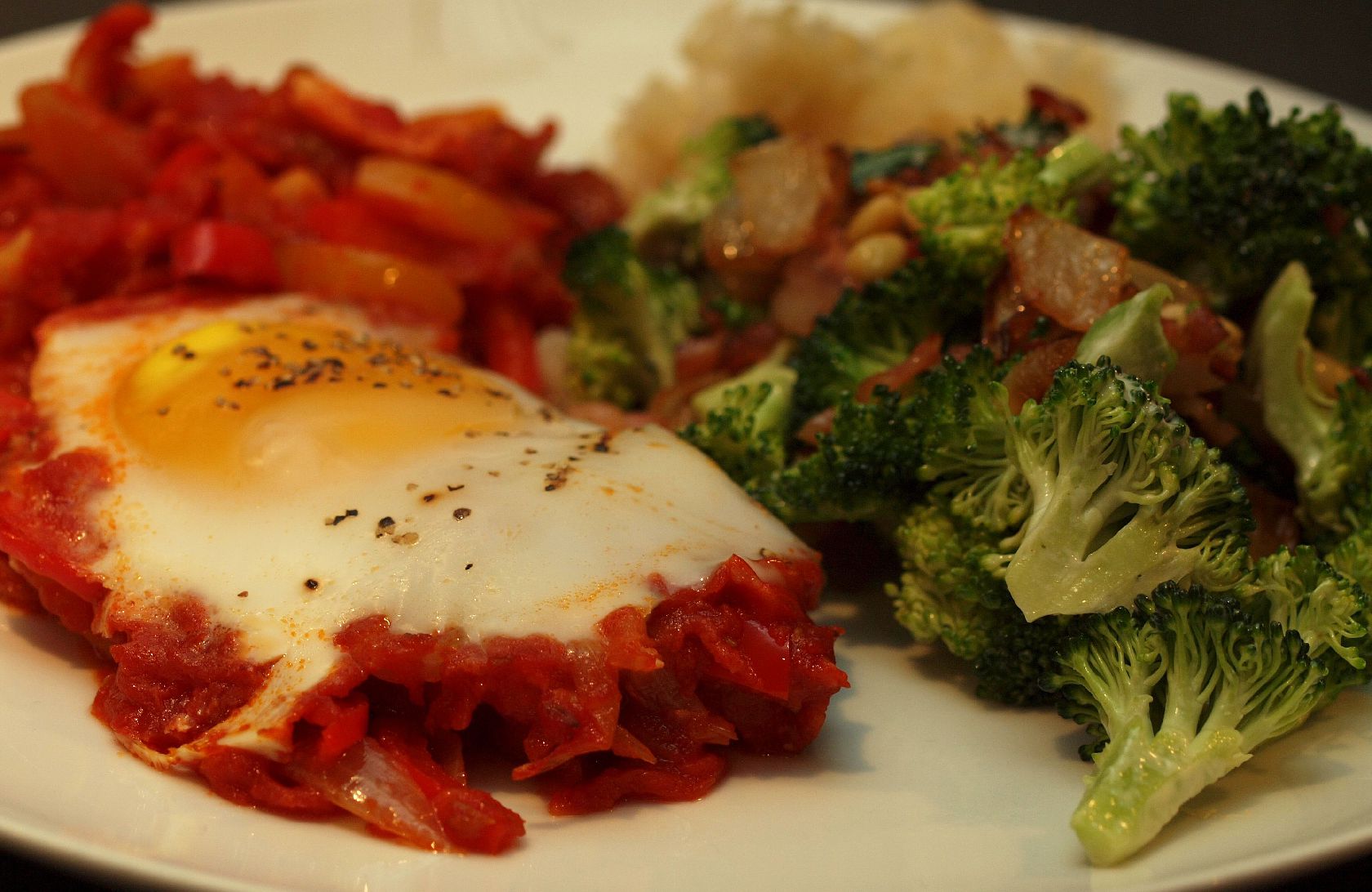 As usual these are all pretty rough numbers. Give it a go, and adjust things to suit your tastes.

Because the flavours improve with slower cooking, and it's such a lovely accompanying food, I'll usually make a big batch (3 times the above quantities) and put two-thirds of the resultant mix aside, just prior to adding the egg. It easily keeps in the fridge for a few days.

If you have some, and sufficient inclination, you can blanch, de-skin and de-seed your own tomatoes. I find that a bit too much effort.

If I'm making a small amount, I'll use a cast iron skillet, so it can go straight in the oven. However I'm usually making lots more than we'll eat in one go, so I typically do the first hour(s) of cooking in a large, deep wok or similar. A wok works well, as the large surface area means it reduces much faster.

Get your pan up to a medium heat, add the oil, then throw in the seeds. These only need a minute or two – you don't want to burn them.

Add the garlic. Cook for a few minutes.

Add the capsicums. Cook for 10 minutes or so. You don't want anything browning, mind. The onion should be nicely translucent.

Drop the heat down to low.

Let it simmer away at least 30 minutes. Longer and slower heat is preferable – I'll generally start preparing this 2 or 3 hours before I'm aiming to eat. But if you really need to, you can rush this dish.

The goal here is to reduce the tomato mixture to a bit more stodgy. Not completely devoid of moisture, however. We're also trying to let the spices permeate properly.

If you're cooking this in bulk in a non-oven-friendly pan, then heat up an oven-friendly (say a cast iron) small skillet over another hotplate, then decant enough of the mix for two people into it.

In the cast iron skillet make two indentations with the back of a spoon. Crack each egg into an indentation. I'd recommend cracking each egg into a small saucer first, if you're prone to letting some shell slip through. You want to keep the yolk intact, of course.

Liberally grind some more pepper over the top of the eggs, and then get the pan into the oven, middle-shelf (you want to cook it, not grill it).

It'll take about 15 minutes. You can go slightly cooler - down to 110C if you like. Eggs dry out at anything over ~83C, so you're going to want to keep an eye on it, and/or reduce the rate at which they'll dehydrate. Too hot in the oven and the top of the egg will cook long before the middle is properly set.

Ideally (though it's very hard to do) you want a firm white, but the yolk in a 'soft boil' form.

In theory you can do the egg bit of the recipe on the stove top, but this doesn't sound as fun. YKMV.