With the recent release of the Raspberry Pi 2 (1GB RAM, 4 cores -- up from 512MB RAM, 1 core) I've been motivated to replace a bunch of basic standalone RPi security cameras with something a bit more sophisticated.

Note that this project (and page) is very much a Work In Progress (WIP).

At the moment I'm using a very basic system, with no facility to auto-propagate captured security images. I'm not, in fact, convinced this is the best approach. A hierarchy of devices, with the ones with remote access also being the most physically secure, has appeal. However, at the very least, I need to design a system that will allow new devices to be added to the network relatively painlessly.

Also note that in my particular case I'm designing for an environment where I do not have always-on Internet access, so the usual approach of just uploading all images to a VPS isn't feasible. I may have intermittent network access, but it'll likely be via 3G, so a) expensive, b) slow. This is why I need a mesh network, in order to provide some resilience in the event one of the units is identified and stolen. I need to be able to subsequently (some days later, perhaps) retrieve the photos taken by that unit right up until it was removed.

So, on this page I'll cover the following items:

Each node is constructed from the following components: 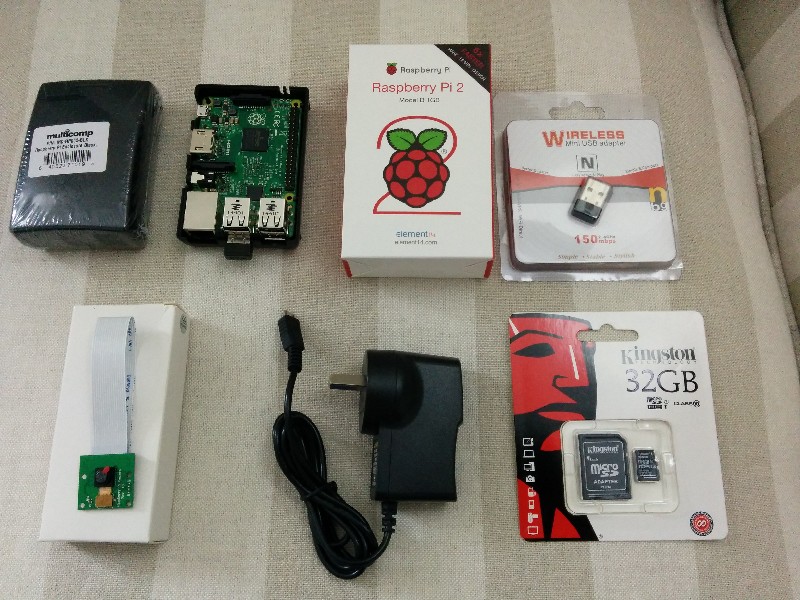 What would I do differently on a subsequent design / purchase?

Biggest impact is cost, of course. When you're building upwards of ten such nodes, as opposed to just making a single media centre for home, you're literally looking at an order of magnitude greater outlay. Fiddling around with software in order to save a few dollars on a single unit almost starts to be a worthwhile tradeoff, on the other hand.

Anyway, I'd almost definitely not spend A$11 per case -- there are some much cheaper varieties out there, but more importantly I'd probably construct custom cases, if I needed a case at all, as (without revealing too much) I've tried to use interesting objects to insert these devices, along with some high-capacity batteries. Fitting the camera into / onto something that's transparent and waterproof was another challenge, of course, and wasn't made any easier by the presence of the case.

Likely I would also avoid the Ralink wifi dongles, too, as they're a pain to get going. Happily I'm not going to be upgrading my software frequently once these appliances are in place, so it's less of an issue (now I've sorted the driver problem out).

32GB cards may be excessive, depending on what approach I end up using for sharing images around (see rambly discussion regarding security further down this page). However, there's not much savings to be had by going with a smaller capacity card, so it's a small concern.

These devices will talk back to a single 802.11 AP, using WPA-PSK2 of course.

I looked briefly at using one (or more) of them as AP's, as there's some lovely code out there that'll dynamically flip a RPi from wireless client to AP, depending on the availability of other AP('s), however this was a bit more complicated than I need, and also brought me back to ponderings regarding security).

PSK2 is, of course, a no-brainer. I'm using a residential grade AP, with hidden SSID, as almost all of my attacks are likely to come from non-sophisticated intruders, so obscurity has significant benefits.

While there are aspects to the network that are undeniably mesh / peer to peer, there's an expectation of one or two highly secure appliances. Secure in the physical sense (no camera attached, hard to find, hard to get to), and the logical (they do pull operations to the camera nodes -- nothing can pull from them).

On first boot you get a couple of options that you can set. It's worth doing this properly, at this point, prior to imaging and replicating the various settings.

Crank up 'raspi-config' (you get it on first boot, but if you ignored it then, return to it now)

My settings of choice:

The File System Expand requires a reboot, so do that now.

This can take some effort, especially if you're using contemporary (for whatever that means for you, right now) kernels on the RPi.

Note that at the time I built these I was using the standard Raspbian distro -- there's not sufficient packages of a native Debian distro to flip away from Raspbian just yet.

Which meant I needed to hunt down the package:

I discovered lots of places where people talk about their challenges getting the mt7601 kernel module compiled / installed / actually running. There are myriad challenges here, including the problem of using a Raspberry Pi Model 2 -- if you use the modules for the earlier model you get 'invalid format' errors for the kernel object (.ko) files.

Anyway, there's a fantastic thread at http://www.raspberrypi.org/forums/viewtopic.php?f=28&t=49864&p=723103 where some tremendously helpful people supply new versions of this module as new kernel / firmware releases get distributed. There's also some good walk-throughs in that thread on how to extract and test the drivers for this USB dongle.

This is the end-state that you're looking to obtain:

There's a couple of ways you can do WPA password configuration -- either directly in /etc/network/interfaces, or via the wpa_supplicant configuration. I prefer the latter (it's more modular, and lets me manage things with SaltStack a bit more elegantly).

If you use wpa_supplicant (it's installed in Raspbian by default) you just need to edit two files.

You can have multiple network stanzas, so you can test at home, for example, then deploy to a different location with some confidence the appliance will come up on the new wifi network.

Once I'd got the wlan0 interface working (with DHCP), I did an:

I didn't create the custom ID for the appliance yet -- I'll do that once they've got their own, clean slate, microSD image burned.

Everything else I'm going to do with these units is done via Salt, so I don't have much else to customise on them prior to duplicating the image.

Once you've got an image that you're happy to use as a base image, the next step is to generate a device dump of this gold image SD card.

Shutdown the RPi, remove the microSD card, pop it into your card reader, and then (assuming you're on a real operating system) you'll create a sparse image with dd.

We'll use the sparse parameter of dd, which ensures zeroed out areas are kept as empty, making the subsequent writes much faster (again a much bigger issue when you're making a dozen or more of these things).

To save you some time I'll demonstrate the differences, just in case you don't want to trust me outright.

Both those commands take ~30 minutes to perform, using a USB2 port, and a generic micro-SD to SD adapter in an SD to USB2 dongle.

You can't really optimise this task (perhaps using a faster microSD card, or a USB3 adapter, though at least one of those is as rare as rocking horse shit). Anyway, point is that in general this time isn't negotiable as it requires a full read sweep through the entire card.

However, the two resultant files are an interesting difference (interesting if you've never delved into sparse files)

Reported disk usage is the same, as you'd expect:

However, actual disk usage was massively different, of course:

Now, bmap-tools is a nifty facility to generate a bitmap of what blocks are actually in a disk image, so that when you write it out (using bmap-tool) you only write the blocks that have data on them. This is much faster, as you'd exect, given we're now writing 3.6GB, rather than 30GB.

In case you're curious, I'll show here the generation of a bmap file from both the sparse dd and the normal dd:

Plus, as you can see, bmaptool alerts you to the fact that you're working with a non-sparse image.

Anyway, this is all going to get very exciting when you start writing out these images to many new, blank, microSD cards:

Excogitations upon the matter of security

My use case is likely different to yours, primarily because I don't have always-on network access from any of these appliances.