A recipe from my mum. We tend to think of these 'handed down over the generations' recipes as having illustrious, nay mystical origins.

A few times I've discovered that my mum found a recipe on the back of some tinned fruit, tried it, liked it, jotted it down, and 50 years later we're thinking it must have come across on the Sirius.

But having said all that, I have absolutely no idea on the provenance of this one. It's one of many of my mum's recipes that were subsequently annotated properly by my sister. Like me, she found it increasingly frustrating when seeking details on quantities or timings, only to be told 'oh, just put in enough' or 'oh, you'll know when it's done'.

And having said all that, this recipe is actually fairly forgiving.

The ingredients list I was given was an annoying hybrid of volumes and weights, but you don't have to be very close at all (obviously a little bit close, but not to the gram, I mean).

Timings? I'd guess 15 minutes to prepare the shortbread (time enough to preheat the oven), 20 minutes in the oven, during which you could be prepping the topping, but I like to let the base cool a smidge before putting the topping on, so let's say another 15 minutes for the topping.

It's also worth noting that this tastes much, much better if it's sat in the fridge for at least 24 hours.

Pre-heat the oven to 170C (normal - I try to avoid fan forced with this recipe - it seems to dry the pastry out too quickly).

Cream the butter and sugar together. I do this by hand, using a wooden spoon. It's not much effort, and helps to offset the massive energy influx you're about to partake. 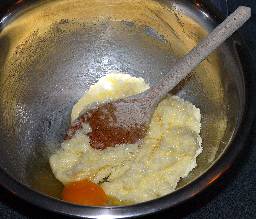 Sugar and butter creamed together, adding the egg

Add the egg and again mix this up really well.

Slowly add the flour. I generally do half the flour, mix to a consistent state, then add a quarter, mix again, and then add the last quarter, mixing one last time.

You'll end up with a slightly crumbly, slightly moist, mix - if you've done shortbread before, there won't be surprises here.

Push the resultant mass out into a greased baking tray with high edges (at least 2cm, ideally 4cm or more). I use a 30cm x 20cm tray, or sometimes two flan dishes (ceramic, about 20cm diameter) but it's really up to you. The quantity is quite forgiving and once you've made it a few times you'll work out if you like a thicker base, etc. 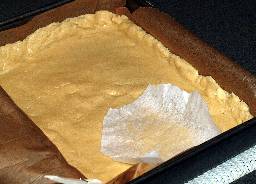 Shaping the shortbread - with greaseproof paper 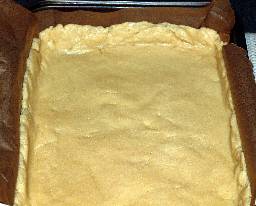 I usually try to make some edges – nice well-defined and consistent edges – but after the first few minutes in the oven the mixture sinks, including those perfect edges, and you end up with a fairly flat base. I'd still recommend trying to make the edges raised a bit as it will make it easier when you pour the topping in later. I mention this just so you don't get too disappointed or worried when you watch it cooking and see the sides melting back into the base.

As per the photo here, I line my tray with some baking parchment rather than greasing it, primarily because I want to be able to lift the whole thing out before slicing (it's a non-stick tray, so I don't want to use even a butter knife on the metal).

I also use a small piece of greaseproof paper to do the pushing and rubbing flat of the base - don't use your fingers as you'll end up with somewhat of a mess on your hands.

Pop it in the oven, lower to middle shelf, for about 20 minutes. By my eye I usually wait until it's just starting to get a bit of colour to it.

Once it's cooked enough, I put the baking tray directly on a cooling rack while I prepare the topping.

Separate the crushed (or pieces of) pineapple from the juice.

Stir continuously while bringing it up to temperature.

Once it's hit the boil you'll notice a transition - it's hard to describe, but you'll definitely see it. The mixture goes a bit more translucent (from the original cloudy) and the consistency changes to be more syrupy. It doesn't take long - a minute or two after it's started boiling. Once this happens, remove the saucepan from the heat, and throw the crushed pineapple into the liquid, still stirring continuously.

Now you can pour the liquid into the shortbread base. If it hits the edges of the tray, no biggy. Weirdly, no matter how much my shortbread sinks when it cooks, or what sizes and shapes (and numbers) of baking trays I use (two round trays, one large rectangular), the quantity always tends to be just right. 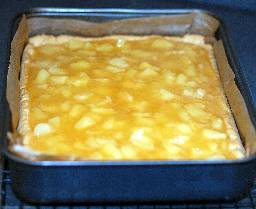 I let it cool down a bit - say for a half hour or so - and then move it to the fridge.

As I mentioned, this dessert is much better the day after you make it – the base gets a bit softer (but not soggy) which makes it easier to eat if you slightly overcooked the base, but we think the flavour improves too (probably as the topping penetrates the shortbread). It will happily keep a few more days in the fridge, but you'll find this dessert is so danged tasty that it rarely lasts more than 48 hours. 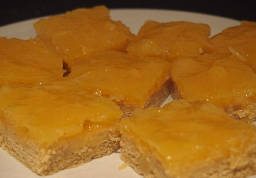