Any person that's ever had to deal with US date formats of mm/dd/yy knows just how frustrating it can be to try to work out what the hell is going on.

Obviously for any given year, assuming you know the year is the last two digits in the first place, there's 132 possibly ambiguous dates out of the full set of 365 or so permutations (of the USA .v. rest-of-world (dd/mm/yy) conventions).

Presumably citizens of the USA probably also get frustrated with the fact that 6.7 billion other humans don't use this format, but fingers crossed that most of those North Americans don't think the rest of the world should change.

And perhaps sanguinely, we can expect that those same people understand that mm/dd/yy is quite the bollocks format.

For me, the lack of ambiguity it offers is the single biggest selling point, with sortability running a very close second.

But regardless of what bit of this international standard is your favourite (yes, I know just how geeky that sounds) it is undeniably compelling simply because it's consistent everywhere.

You know. Internationally-like. The hint is in the name.

So having people faff around with feeble facsimiles of the format just isn't on.

I once saw someone posting a proposal in some random forum to use YYYY-DD-MM. Unsurprisingly it was a chap living in 'Murica. I quickly responded in a violently sarcastic tone, naturally calling upon the Caps Lock key, unleashing the full fury and all that. He was never heard from again. Eternal vigilance is the price of international standards, after all. I'm sure he understood, and doubtless became a better person for the enlightenment, too.

Anyway, for those of us in IT it's an especially cherished standard. So it's weird that Google continues to get it so wrong.

Google Spreadsheets does support the format.

And you have to dig a bit to find it.

It deserves a place one menu up.

Once you think you've got a cell properly configured with the only sane date format on the planet, as soon as you try to edit it you get flung into Backwards World and given a DD/MM/YYYY string to edit.

Cumbersome stuff, especially if you are trying to quickly edit a bunch of dates. 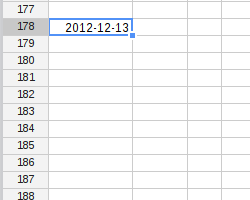 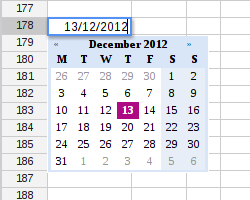 Even more frustrating is the dearth of date-time formatting options that are available. There's only one ISO-8601 compliant format on offer, and that's for the most simple date form of YYYY-MM-DD only.

But with Google spreadsheets there's only one format that provides a combined date & time, and that's the regrettable DD/MM/YYYY hh:mm:ss. That's it. Though I suspect this sole option is modified by the locale you've selected, as the North Americans couldn't possibly be happy with that arrangement. 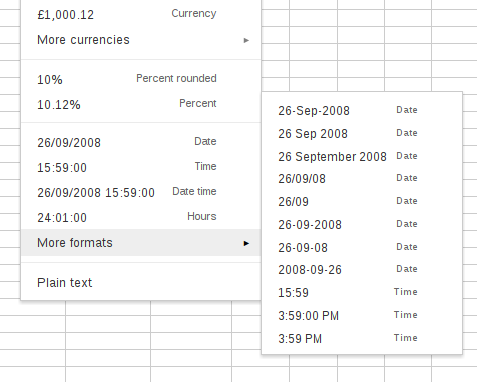 Format options for date and time

So the basic ISO-8601 date format option is a second rate citizen, and other standard formats such as yyyy-mm-ddThh:mm[:ss], yyyy-mm, yyyy-ddd, and yyyy-Www aren't on offer.

Interestingly (but it's not just Google that does this) they wimp out and use an example date here (26th September 2008) that won't be ambiguous with the vast majority of the formats on offer. If these other formats were worth a damn, they'd demonstrate them with a far more interesting date, say, like the 2nd of January, 2001.

This tacit acknowledgement that all the other date formats blow exhibits a lack of conviction to being wrong.

Google's Android OS lets you select something vaguely proximal to ISO 8601 format, but not quite.

So points for being consistently poor.

On offer is the bewildering YYYY/MM/DD format - the kindest thing about which you can say is that it's probably not ambiguous, even if it's slower to scan than the hyphen-separated version.

Plus, of course, not an actual standard. 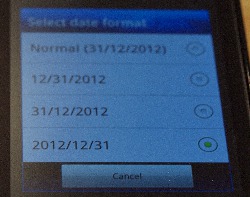 And then there's the not-so-subtle implication that dd/mm/yyyy is normal – if you choose something else you are therefore not normal.

Once you do configure a broken date format for your phone, you then get to bathe in the glow of casual indifference cast by all the Android application developers that blissfully ignore your preference &ndash instead they force their own version upon you – dd/mmm/yy, dd/mm/yy, yy/mm/dd - all of them doubtless thought very fondly of by the respective authors of each app, but hated by all discerning international citizens.

And there's no way to change this.

I used to work with a guy who was irretrievably committed to the idea of attaching the day-of-week on every written record of a date (and he recorded the date on a shedload of documents and printouts) despite the obvious fact this information was all but irrelevant (and in any case deducible) for things more than a few weeks distant.

Yes, Google seems to agree with him on this affectation – but that just makes them both wrong.