Further experimentations with tasty slow carb meals led to a slight adaptation of a recipe from Ghillie Basan's most excellent Tagine - Spicy stews from Morocco book.

Lemon juice has a measurable effect on GL, and it's only a tiny amount, but otherwise everything else here is well within spec.

As with most tagines, you can dabble to your heart's content – modifying quantities and spices with almost no risk at all. 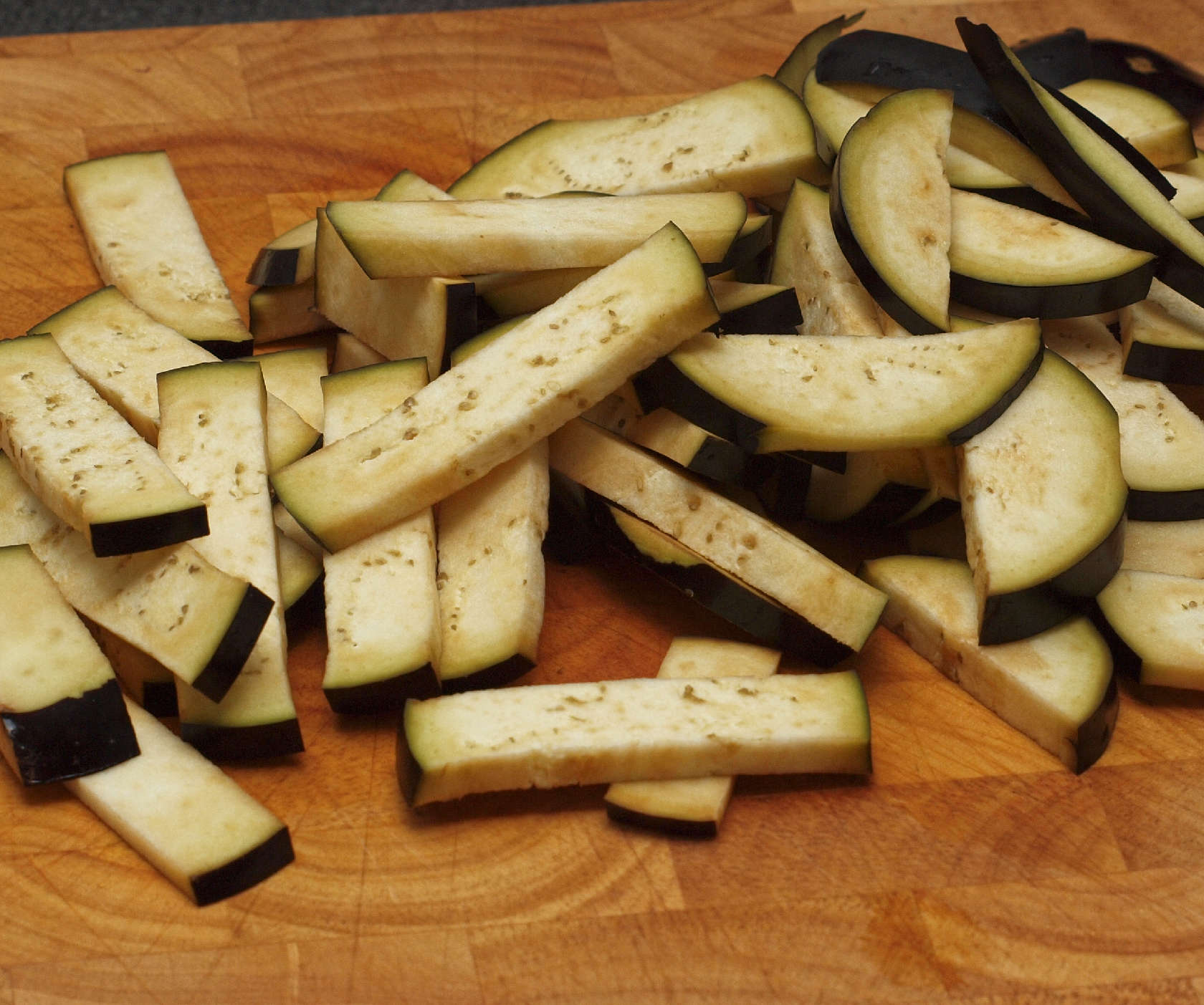 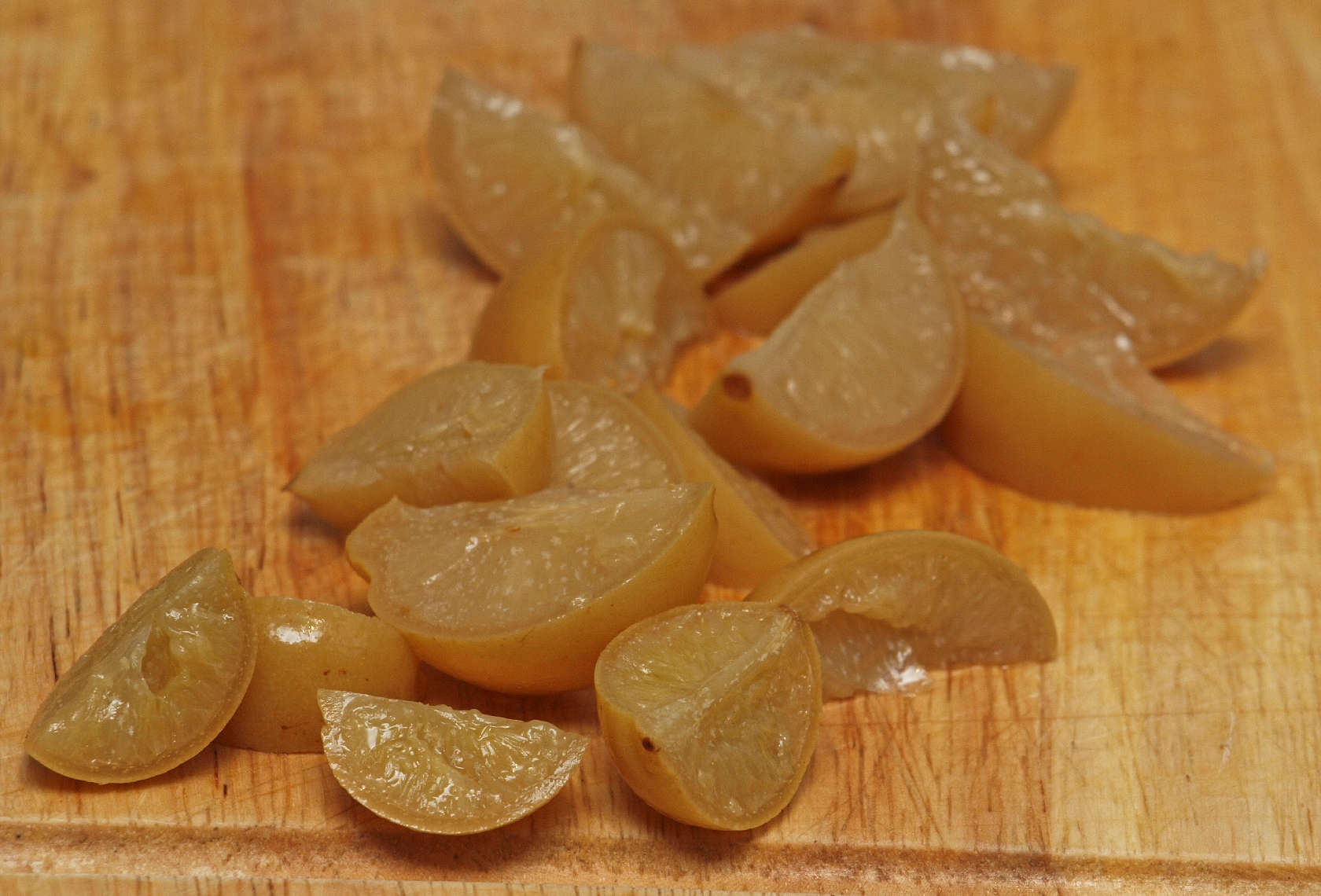 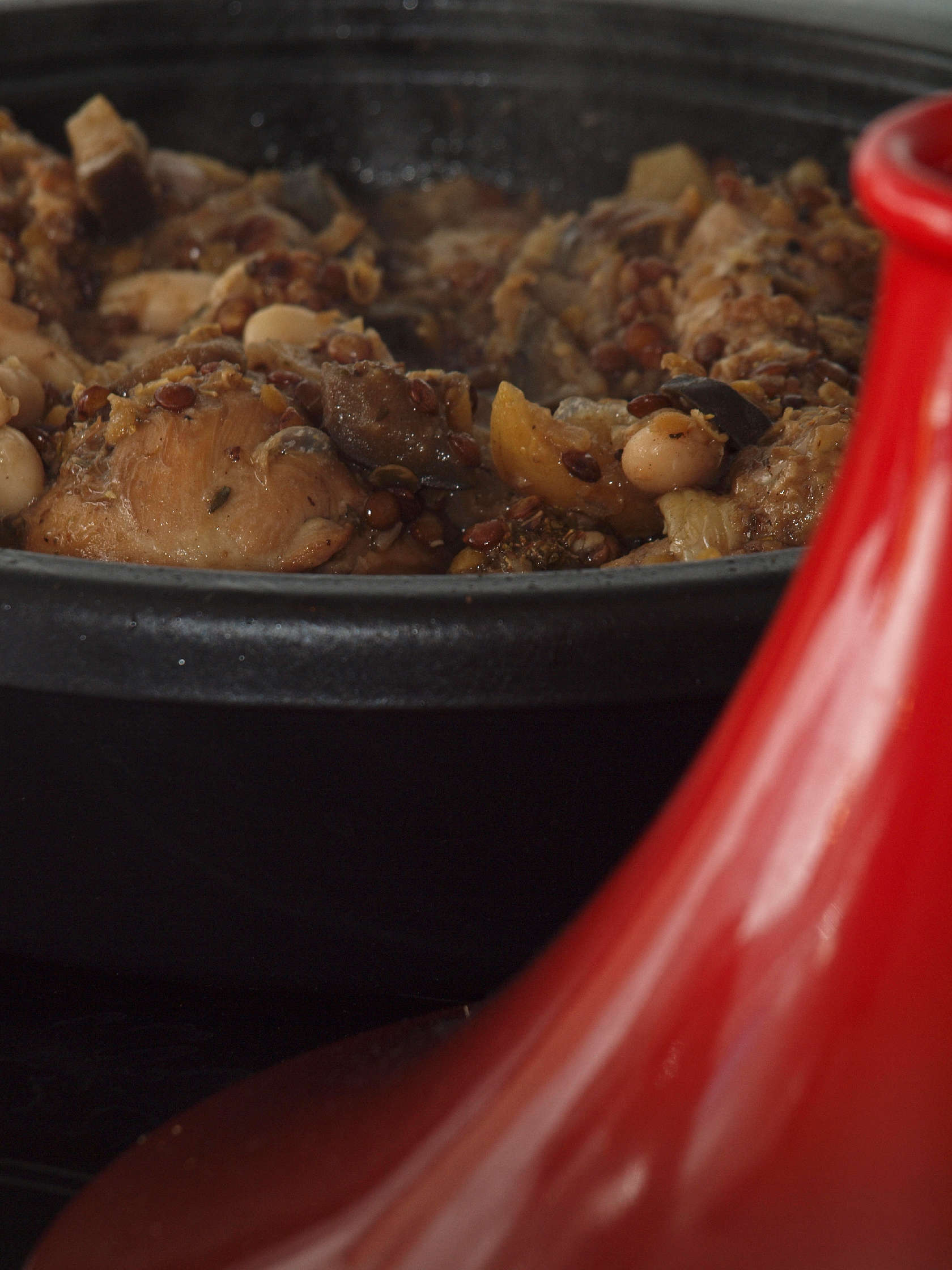 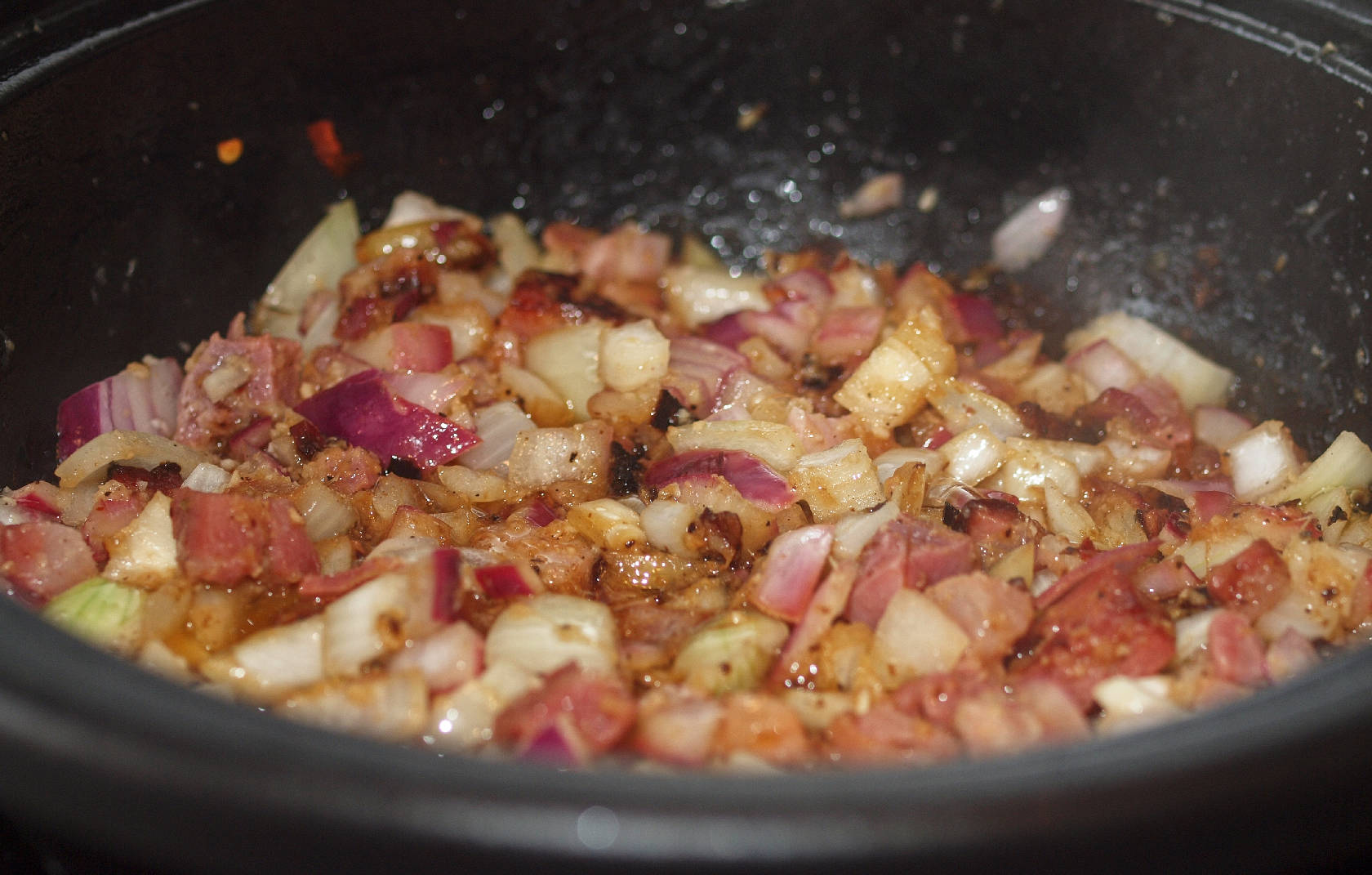 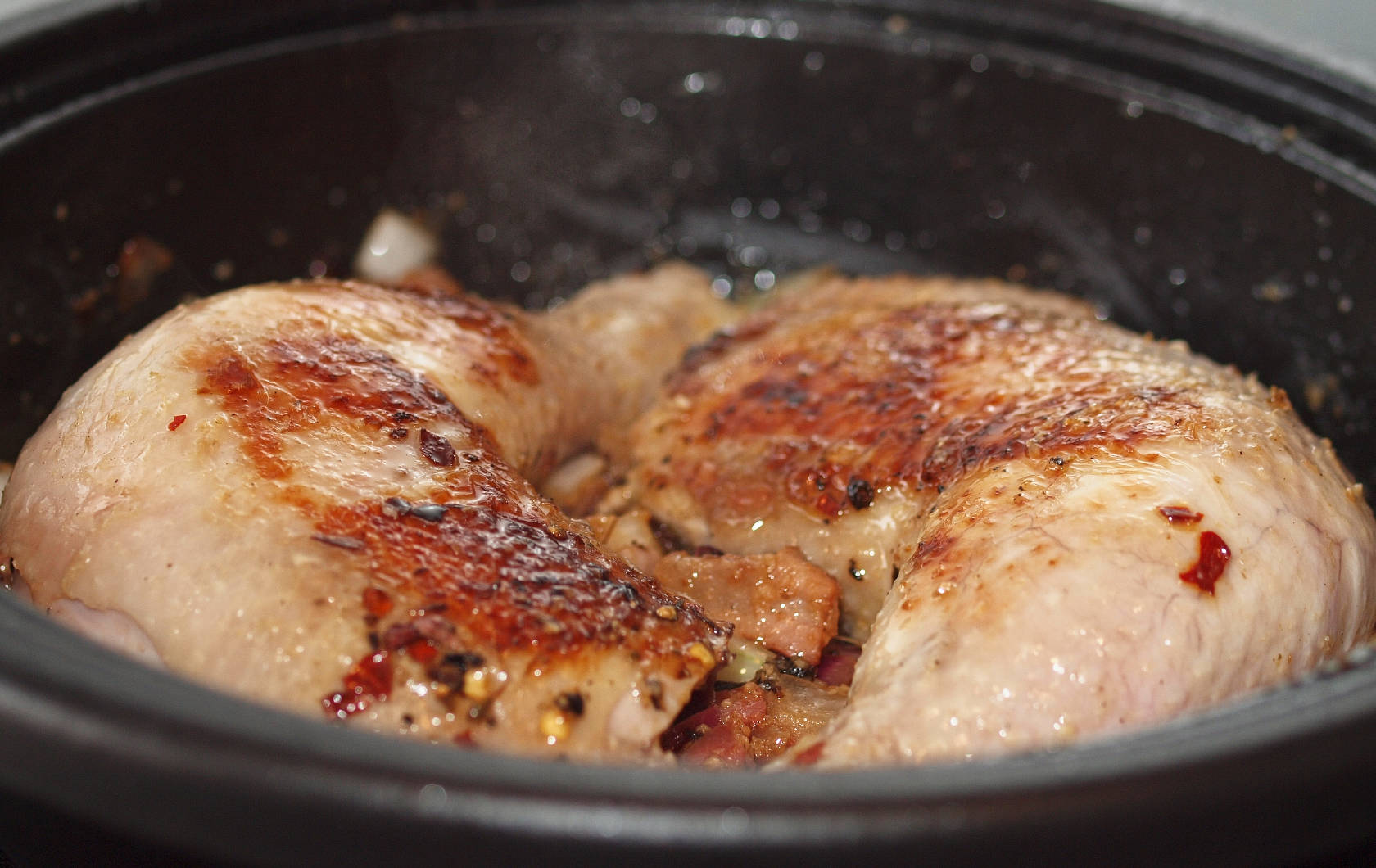 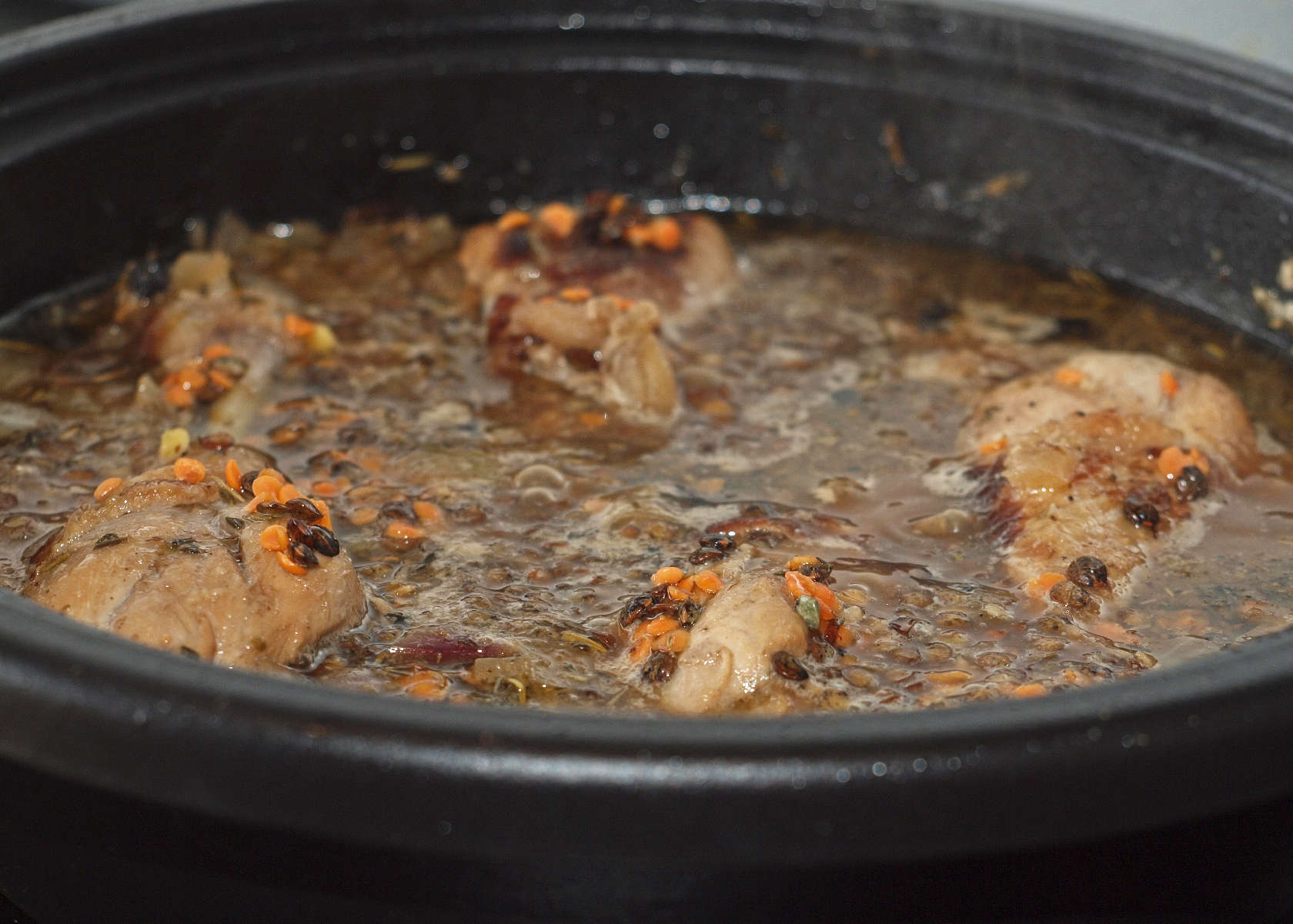 Some hours (6 say?) before you're going to cook, make the marinade up – preferably in a plastic container with a good seal as it can stink out your fridge in minutes – and get the chicken pieces in there, pop them back in the fridge, go do something else.

It'll take 2 hours to cook, and ideally you'll use a tagine – though something a bit more saucepanny or even a casserole dish in the oven would probably work. Wouldn't be as suave, though.

I use a metal-based tagine with a ceramic top (Le Creuset) which is one of the few interpretations of this cooking vessel that will work on pretty much any surface. Adjust these instructions to suit, natch.

Heat up the base – not too hot if you're using olive oil. The intent is to brown the chicken briefly, and I like to toss in some of the onions at this stage and get them frying slightly too, for the added flavour. I'll also toss in a small quantity of pancetta if I'm using it.

Once the chicken's slightly browned, pour in some water – they say to 'half way up the chicken' but it's a bit nebulous. I'll often chuck in a boat load of onions, mix it up with the pancetta, and then sit the chicken on top of that mix. I much prefer a slower cooked meal when using the tagine, so I'm in no rush. Then, once the water has started to boil gently, drop the heat down so it simmers very gently indeed, then pop the tagine lid on.

About 30 minutes in I like to chop up 2 eggplants – not sure on weight, but whatever you find fits in your tagine. I chop them into small cubes or ribbon-like pieces. I take the chicken out, briefly, and stir the eggplant into the mix, then pop the chicken back on top.

At this point I'll optionally chuck in some washed split peas and/or lentils. Remember that they'll suck up the water, so consider that, and keep an eye on this the first few times you do it or you'll start to burn things.

Over the next hour or so I'll lift the lid periodically and move things around – turning the chicken upside down each time, and also giving the mix a good stir.

If I've planned ahead I'll have some nice fresh beans that I've boiled up independently, and I'll toss these in for the last twenty minutes. I like to have a bit of bite in the beans, but not too crunchy (bad things happen if they're too crunchy).

At about twenty minutes out (so, say, 1.5 hours after you've got the chicken in with the simmering water), I chuck the oregano, thyme, sage or whatever in over the chicken. At this time I also chuck in the thinly sliced preserved lemon pieces, poking them under the water level.

I like to serve this with some avocado and mini-roma tomatoes, and perhaps some sauerkraut, on the side.