Well, one less mystery in my world. The past few weeks my machine would do a neat little trick of powering itself off and then back on again during a reboot – something I've seen it do usually only after changing OC or similarly significant settings within the BIOS.

Today it came up with the worrying 'Your overclocking settings are not tenable' warning (mostly worrying because I'd set them back to baseline months ago in the pursuit of stability), and continued to do this after a couple of reboots.

Decided it was time to pull the vacuum cleaner out and give the box a good once-over. Living on the second floor, and keeping most windows closed throughout the cooler months, you kind of expect (hope?) to have less dust coming into the flat. No such luck it seems.

Seems that the fins on my rather nifty CPU water-cooler (Corsair Hydro H50) were getting a smidge chogged up.

Curiously the CPU temperature as reported by the BIOS, even after 2 days uptime, was only around 45C – quite impressive given the almost trivial airflow that would have been making it through those fins, and especially in comparison to what I used to see the original Q-series Intel cores running with stock coolers and normal settings. 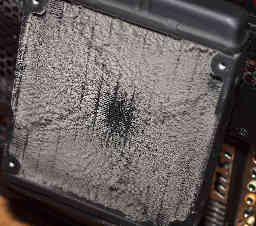 Close up of watercooler fan 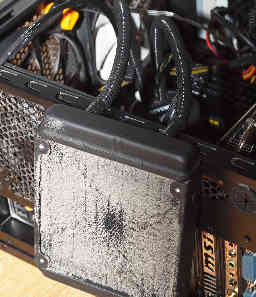